One fifth of children receive over €1,000 on their First Holy Communion Day

MummyPages.ie, Ireland’s largest community of mums investigates the rise in expenditure by families in preparing for their child’s First Holy Communion. Now in its second year, MummyPages research on ‘First Holy Communions in Ireland’ covers all aspects from the costs to the celebrations and the gifting of money.

This year the MummyPages mums continue to feel that the First Holy Communion celebrations can be a bit excessive with 87% of mums, consistent with almost the same number last year at 88%. The online mum community says that the parties, gifts and fuss surrounding the communion day attire, often drowns out the meaning of the special sacrament that the child is to receive.

Another issue concerning many of the MummyPages mums (71%) is children’s new found focus on the amount of Communion money they will receive which according to six in ten mums (59%) earns children bragging rights on the school playground. The average amount of money children were gifted last year on their First Holy Communion was €323 up from €299 in 2014. However, the biggest jump is at the upper end of the scale where 56% of children received sums in the region of €500-1,500 compared to 31% in 2015, and of these one fifth received over €1,000.

Over half (57%) of parents report feeling the strain when it comes to paying for their child’s First Holy Communion with the average family spending between €1,222 – €1,525 depending on whether they host a party in a venue or at home. 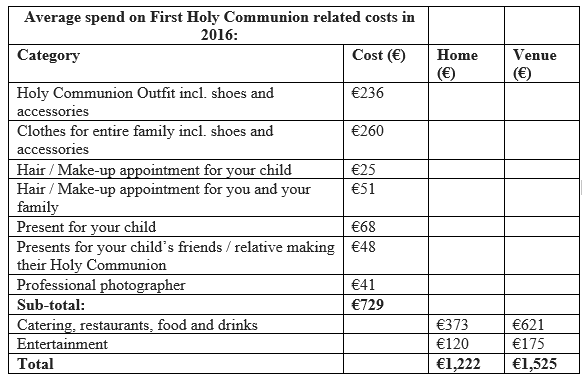 Four in ten (42%) mums opt for specialist boutiques for their child’s communion outfit up 10% from the previous year, followed by 17% who purchase from a department store, while 9% of mums choosing to borrow a pre-loved outfit from a friend or extended family member.

Interestingly, mums are calling for primary schools to implement cost saving initiatives to help parents cope with the Holy Communion costs with 70% of mums agreeing that children should instead wear their school uniform on their special day.

Hair & Beauty appointments: 59% of mums use the Holy Communion Day celebration to get their little girl’s ears pierced. 33% of MummyPages mums will style their own child’s hair for their big day, while 58% of mums will spend up to €50 on a professional hair appointment.

Gifts: 98% of parents believe money and a card is the most appropriate gift surpassing jewellery or religious token at 88%. When it comes to getting the purse out, the amount of money being put into a card varies with 46% giving €5-20, while 54% of mums give a generous €30-50. Insights reveal the average amount of money being gifted in a Holy Communion card is €30

Mums are using this opportunity to introduce their children to saving with 87% of mums stating that their child will save most of their Communion money. The top choice for 59% of our young savers seems to be the Credit Union, 26% will use their local post office and 9% will put their saving in a bank.

Commenting on the findings, Laura Haugh Mum-in-Residence for MummyPages.ie says:
“It seems that as we become more financially stable the materialistic nature of the Holy Communion Day is creeping back in. Parents are spending more on outfits and the celebrations while children are now obsessing over how much money they will receive in gifts on their big day.”

“The general consensus amongst mums is ‘less is more’ when it comes to the beauty regime for little girls preparing for their Holy Communion. Most of our mums agree it is acceptable to wear subtle nail varnish, have their ears pierced or get a professional hair-do, while wearing make-up and fake tan is considered totally inappropriate.”

“In an effort to help parents curb costs and instil a sense of community within their school, many will now throw a big party for the children after the church ceremony. In addition, just over one in ten schools will hire sacramental robes for the children or insist they wear their uniform on their big day.”